Our third meeting of the year was to Ashlawn Railway Cutting, led expertly by Phil Parr who knows every inch of the site. After noting over 50 plants at Grassland area 5 we moved to Yellow area 3 where we spotted our best find of the morning, just one spike of Common Broomrape (Orobanche minor) - see Di’s photo below.

Also found were a number of horsetails which refused to be identified easily, with different keys giving different results- in the end we decided it was Equisetum arvense. According to the BSBI referee this is quite normal and he’s looking forward to the new book coming out soon- so are we!

After a picnic lunch we had the chance to visit Allan’s Meadow.

Sometime ago I foolishly said I found mosses & liverworts interesting and John Walton took me serious ... only Joking John, they are fascinating. Anyway, the upshot of it being I was given 5 pots of green blobs with water in these turned out to be 3 mosses and 2 Liverworts so having checked them against my book

I thought I'd have a go at photographing them .. here are a three of the more successful ones.  For those of you interested they were taken with my trusty old Fuji S9600, an excellent camera with a macro that will focus at about 1/2" (about 12mm for the newer people) I just nee to set up some sort of lighting rig for it as the internal flash isn't the best at these distances.


number two
And finally a liverwort
The remarkable thing about these specimens is I left them where we hold our meetings and they have survived quite happily in their plastic specimen boxes with added water for about 2 weeks!! Now you know why I find them fascinating...

The first visit of the re-formed WFG was to Middleton Lakes.

10 people turned up and between them managed to avoid the rain and find 106 species.

We surveyed the Mill Plantation-small mixed woods & found 6 Ancient Woodland Indicators. Also looked at a silt pool- with Ulex europaeus, a meadow- with only very common species and a newly flattened spoil heap with nothing much on yet……..

Plus a sighting of Pyrochroa coccinea (Black-headed Cardinal Beetle) a 3rd county record only seen at Ryton and Wappenbury previously. See photo below.

Our 2nd visit was to Arley Wood; a small mixed and partially re-planted Forestry Commission Wood. The trip was well supported and we saw 115 species-28 of which were AWI’s-the best of which was a beautiful example of Limax cinereoniger ( a slug).

Full list on request.
Posted by Unknown at 20:25 No comments:

Here are a few reports from some of the group supporters

Both of these sites are Warwickshire Wildlife Trust reserves and are open to the public.

Brian again reminded us that one of Warwickshire’s most handsome plants is now also in flower. The colony of Meadow Clary (Salvia pratensis) at Pillerton Priors can be viewed near the road sign for the A422 for Stratford at SP2897347594. Be quick, as last year’s flowers suffered under the mower.

Conrad Print and Phill Clayton of the Stour Valley Wildlife Action Group have been monitoring a group of Green –winged Orchids (Anacamptis morio) at Midsummer Meadow SSSI, Darlingscote.  After a careful search 57 spikes were recorded.


Has anybody been to Draycote Meadow this year? Can you let us know how the colony is doing please.
Posted by Unknown at 20:57 No comments:

Early Spring in the north

Around the county there are lots of good sites to see bluebells this time of year but, being biased, one of the nicest is on my doorstep.  Here are a few shots from quarry lane Mancetter, the other afternoon. 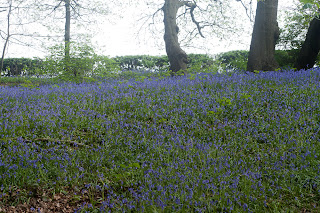 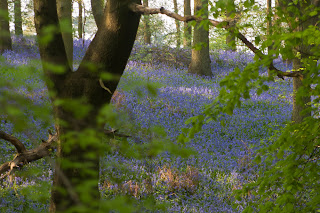 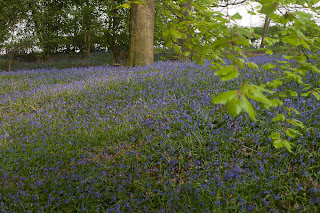 Unfortunately the camera just can't do justice to the spectacle so, if you have some near you - go they won't be here long!! 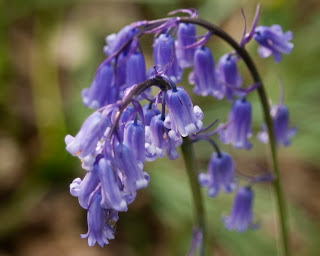 And the bonus is the smell from them.
But it's not just a bluebell fest other plants thrive here as it's a nice bit of beech wood
An easily overlooked plant but the food plant of the Orange-tip butterfly and a good source of pollen for early Bees.
Wood Anemone is one of the first flowers to show before the trees have there leaves on.  So delicate they look like they'd blow away in a breeze.
Quite an attractive looking plant, again good for early nectary sources, but you wouldn't want this in the garden as it's a member of the Mint and nettle family !
And finally I give you Lords and Ladies a member of the Arum Family. Its striking flowers appear in spring and consist of a lime-green spathe which protects the purple cylindrical spadix are followed by bright orange poisonous berries. It also has several other common names such as cuckoo-pint, sweethearts, Adam and Eve, jack-in-the-pulpit, wild arum and my favourite - willy-lily... I've never grown up. Like it's big brother the Titan Arum that flowered at Kew gardens a few years ago the scent is pretty disgusting, relying on Carrion flies to pollenate it.  Some of these can usually be found dead in the bottom of it, but it's not carnivorous like pitcher plants they're just "collateral damage" as they say.
Posted by Unknown at 16:15 2 comments:

Earlier in the year Brian Laney found a colony of Early Meadow Grass Poa infirma at the M40 motorway services near Warwick. Early Meadow Grass is a much smaller version of the common Annual Meadow Grass Poa annua that usually grows in sand dunes in the SW . It comes into flower in February and March and soon drops its seeds. I have had a look at Tamworth services on the M42 but that was squeaky clean botanically with brown strips around the flower borders and grass edges. Somebody had been very busy with the weedkiller.
Posted by JW at 18:15 No comments:

On Wednesday Ron Thomas and Keith Warmington e mailed us saying that there was patch of Toothwort near the bird hide at Coton Lakes. Early on Thursday morning we went there to have a look at it. There are about 40 spikes in full flower and well worth a photo, even with the sheet of metal next to it. They are on the left hand side of the path about 50 yards before you get to the hide, about six feet from the path edge under at the base of a tree. Grid ref; SP21326 94521.

There are very few sites for the plant in the north of the county, one on a farm with no access at Hurley, and another at Galley Common which for the last two years, according to Michael Senior, hasn't flowered due to children playing and trampling under the tree. Please let us know if you find anymore.
Posted by JW at 19:41 No comments:

WILDFLOWER RECORDING: WHAT DO WE WANT?

You can send in casual records of plants that you see when you are walking through the countryside, or long site lists from your favourite places in Warwickshire.

· We need records of common species as well as rarities.

· We also want to know if rare plants are still there. If you have time to “mentor” a local rare plant and visit it every year or two please do not feel silly sending a record in every time.

· If you find a common species, you only need to send in one record for it from each 1km square with a six figure grid reference.

On the Sightings Tab is a submission form for you to record your sightings on or if you have a lot then we can send you a spreadsheet to record them on by request using the Contact us page.